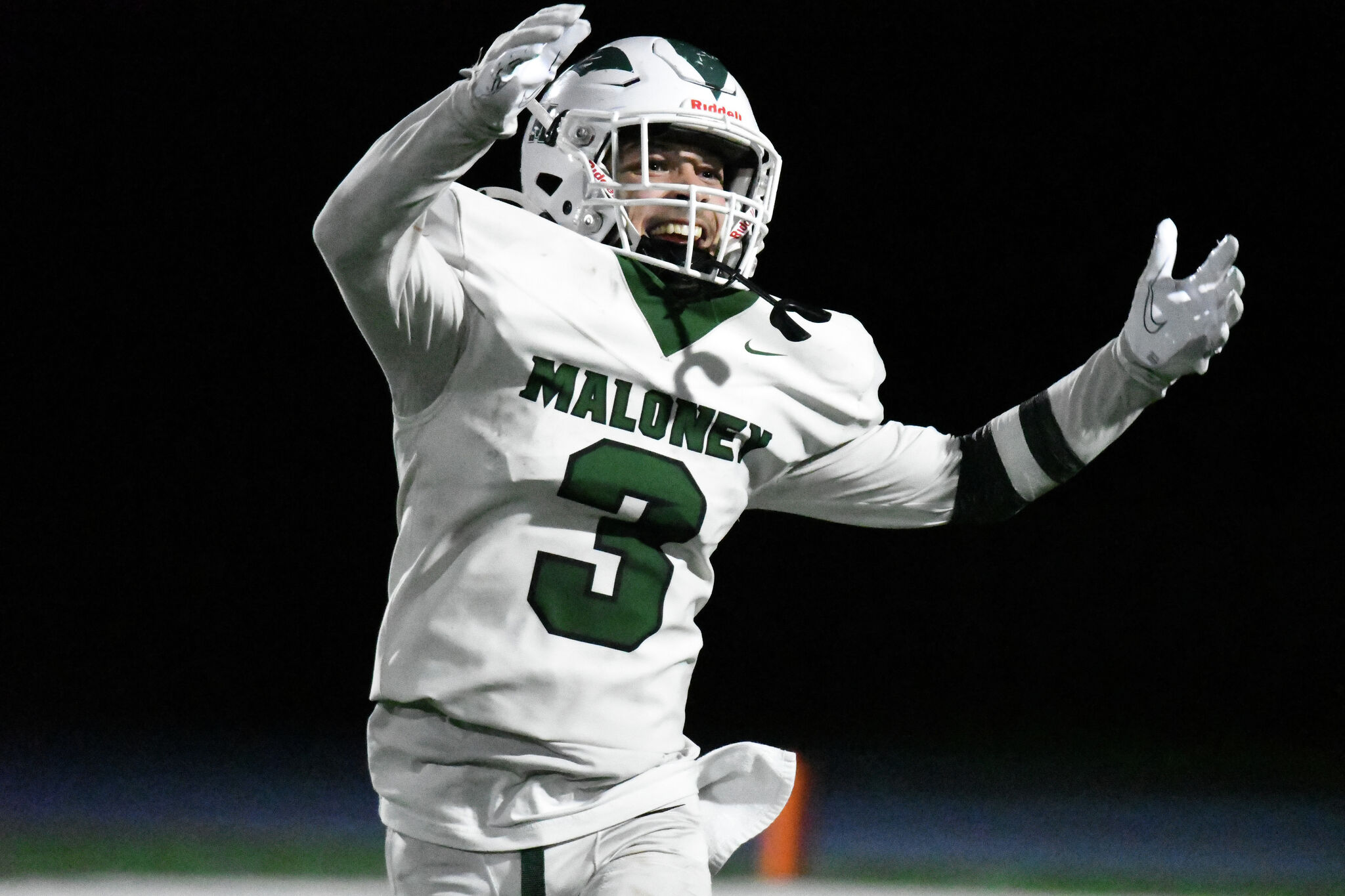 5-ranked Maloney beats Darien on the road in CIAC football

DARIEN — If winning the CIAC Class L State Championship last season put Maloney’s football team on the map, the Spartans planted their flag for all of Connecticut to see Friday night.

Utilizing a dominating defensive effort and capitalizing on their scoring opportunities, the Spartans, ranked No. 5 in the GameTimeCT poll, did something few predicted in the state, beating defending LL class champion Darien 21 -9.

“It’s hard to put into words what this means for the program, but it’s something we’ve had our eyes set on for a long time,” Maloney’s coach Kevin Frederick said. “Not just this season, but when we first took over the program. We wanted to be one of the best teams in the state of Connecticut. No one believed in it, except us in our program, the coaches, the players, parents – they all believed in it. It’s a big win for our program, but we want it to continue. We’re not satisfied yet.”

Maloney (3-0) hosts Hall next week and has games at Newington and at home to No. 6 Southington later in the season.

Although it was only Week 3, Maloney was just one of seven Class L teams that entered the weekend undefeated. This victory gives them more control over their destiny in the future.

While both teams are defending state champions, both also find themselves in the new version of Class L and can revisit this game when it comes time to add it all up in late November.

Darien is 1-2 and hits the road for the next three weeks with games at Warde, Wilton and Ludlowe before returning home for the highly anticipated game with Greenwich on October 29.

Darien’s coach Mike Forget said the Blue Have had chances but couldn’t convert in the red zone, where Maloney stopped them on four of their five trips.

“They wanted it more than us,” Forget said. “We had five offensive appearances in the red zone and came away with just seven points. It’s more about us than them. Our defense did enough to win the game today. They gave us chances, even towards the end of the game, but we got into bad situations that we couldn’t recover from.

Darien’s opening drive ended with a turnover on the downs and Maloney walked downfield before Darien’s defense stopped them at the 2-yard line on fourth down.

Darien couldn’t move the ball and kicked, but Joziah Gonzalez returned the short kick to the 14-yard line.

The next play, Kyle Valentine hit Donte Kelly in the back corner of the end zone for a touchdown.

Darien’s offense would remain stagnant until his last possession of the second quarter, when Jake Wilson capped a 44-yard drive with an 11-yard touchdown run, sending the game up at halftime 7-7.

Following an interception by Zakkai Moore, Maloney recovered the ball on the 31st and a few plays later Joshua Boganski dived a yard.

Later in the quarter, Boganski ran one from 2 yards after Gonzalez returned another short punt from Darien at 2.

In the fourth quarter, Darien returned the ball twice inside the 10-yard line and Maloney also had two assists from Darien in the final 12 minutes.

Joziah Gonzalez, Maloney: Gonzalez was all over the court for Maloney, but it was his punt returns and excellent defensive play that helped the Spartans win.

“We knew what we had to do, coming here at a stage like this in Darien. This is their turf and we have to prove ourselves,” Gonzalez said. “The linemen played well, the offense played well and as a team we played well. All we talked about in training this week was flying for the ball. You work hard in practice and it pays off. You get 11 hats on the ball in training, that’s going to translate into the game and that’s what happened today, the defense played really well.