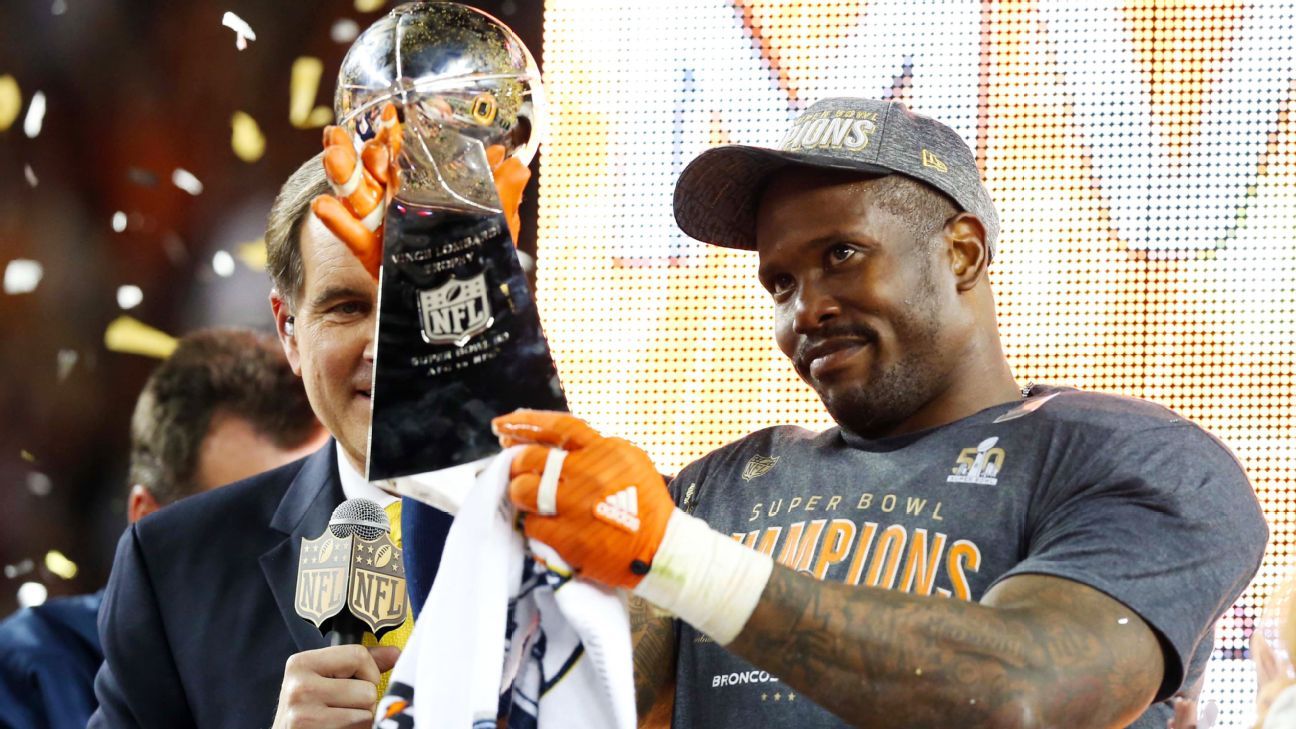 ENGLEWOOD, Colo. — Every time Von Miller has entered the Denver Broncos compound over the past six seasons, he’s been greeted with one reminder — or 10 — of his pinnacle in his playing career: Super Bowl 50.

On that day in February 2016, Miller dove and snatched the Lombardi Trophy from the Carolina Panthers. He finished with 2.5 sacks — two of which resulted in Broncos touchdowns — six tackles and a Super Bowl MVP. Images from that championship day are all over the halls of the Broncos’ suburban Denver facility — the bags, the celebrations, even the sparkling trophy.

Miller last made those recalls Nov. 1, the day the Broncos traded him to the Los Angeles Rams. Leaving the building that day, he said, “Seeing the pictures as I walked out made me cry, we still have Super Bowl 50.”

The Broncos haven’t made the playoffs since that Super Bowl victory and Miller has often been asked if he fears his greatest moment is behind him. He’s now just days away from – as he’s often said in Denver – “the opportunity to make another big time.” Miller will start at linebacker for the Rams in Super Bowl LVI against the Cincinnati Bengals (6:30 p.m. ET, NBC).

Mixed in with those very real tears he shed as he left Denver was the sudden, tangible idea that he could hit the big stage again.

DeMarcus Ware, who was Miller’s teammate for three seasons with the Broncos and the player Miller has consistently said helped him go from Pro Bowl player to all-time player, said the experience of Miller at the Super Bowl can bring a lot to the Rams locker room. .

“With everything you would hope for in play, he did his best,” Ware said. “I’m proud to be a leader for this team, it was important to me. And I had done a lot in my career up to that point, but I didn’t have a ring until we won. Now Von can bring all that leadership, all that stuff you gotta have, and when he talks everyone knows he not only has a ring, he played one of the best himself. matches of all time to get it.”

“It’s absolutely important how he played in those moments when they won the Super Bowl in Denver,” Rams coach Sean McVay said. “… The guys believe in it, his track record speaks for itself. His work, his resume, his way of behaving, demands respect.”

Miller was a 26-year-old player who reached the peak of his powers during the 2015 season. That year was his fifth straight season in the playoffs after the Broncos won five straight AFC West titles. It was their second trip to the Super Bowl in three years.

“I just thought that was how it was going to be every year,” Miller said.

He’s 32 now, in his 11th season with eight Pro Bowls and three first-team All-Pro selections on his resume. The trade was an unexpected and life-altering change from his “Bronco for Life” plan.

He arrived in Los Angeles recovering from an ankle injury and was not sacked in his first four games with the team. He’s played eight in nine games since, including two in the playoffs.

“We talk all the time about the greatness of competition, of being at your best when it’s needed,” McVay said. “I think he exemplified it through the playoffs here.”

Super Bowl LVI represents what Miller has been pursuing almost since the time the confetti stopped falling after Super Bowl 50. The chance to add another high to his career. He was talking about it last summer. Ready to put nearly a calendar year of rehab behind him, Miller lamented the Broncos’ playoff misses and admitted they had begun to wear him down.

• Von Miller gets another chance in a ring
• Pats have big decision after losing OC
• Can the Jets copy the success of the Bengals?
• Former All-Pro Kennedy talks about the Tuck Rule
• Robustness: Burrow plays QB like an LB

Since the trade, Miller has done everything he can to help the Rams get to that point, even taking on a mentoring role to All-Pro defensive tackle Aaron Donald, whom he says he helped become more vocal.

This week means something different for Miller than it does for his fellow Rams. That’s why Miller took the time to talk to all of his still-new teammates about what a title win can mean.