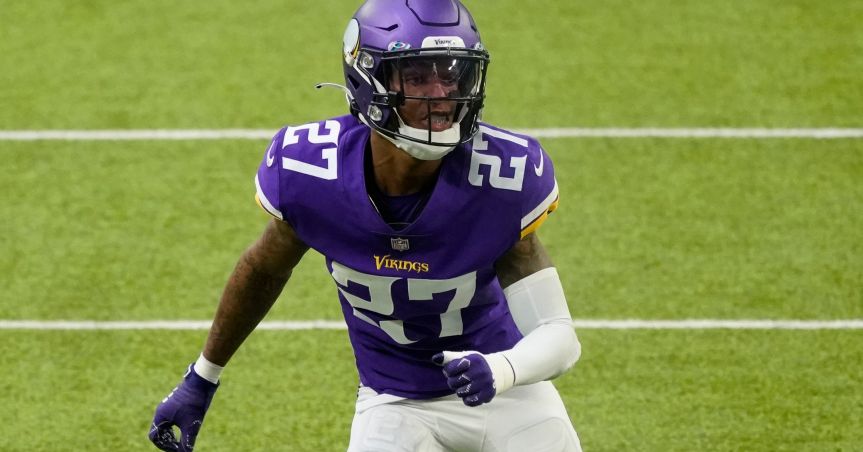 Cameron Dantzler: Step-up candidate for the Vikings this season

The Vikings had a record 26 draft picks over the past two years, and 24 of those remain on the Vikings roster. And while fans are now focused on the upcoming draft, current Vikings players, including these recent draft picks, are returning to practice this week. Several players from the last two drafts could see bigger contributions to the team this season, and coaches’ assessment of their abilities could influence how the Vikings pursue draft picks at the end of the month. In the first of a series of profiles of these players, I’ll take a closer look at Vikings cornerback Cameron Dantzler.

In my first post-draft analysis of Dantzler, which included all of his scouting reports, PFF college grades, game movie, etc., the main concern about him was his slight build – 6’2″ but only 188 pounds at the Combine. It turned out that Dantzler drank a lot of water before his weigh-in to alleviate some weight issues, but that caused him to run a poor 40 – just 4.64″. He later ran a 4.37”40 on his pro day, but all of that only created uncertainty about him.

And so despite a great tape, including holding Ja’Marr Chase to just 13 receiving yards – his worst game this season – Dantzler fell in the 3rd round when the Vikings selected him.

But right off the bat, Dantzler was getting high marks in practice and training camp. At some point during training camp, Adam Thielen, who had been paired with Dantzler on several occasions, came up to then-head coach Mike Zimmer and said, “This No. be good,” referring to Dantzler’s number. Dantzler would go on to earn a starting position in the Vikings’ revamped secondary after losses to Xavier Rhodes and Trae Waynes.

Dantzler struggled during the first part of his rookie season and missed a total of five games – two early with a rib injury, two mid-season with a concussion and the final game of the season with a hamstring. But the last half of the season, Dantzler finished as the league’s top-ranked cornerback, according to PFF:

For the entire season, Dantzler finished as the 2nd highest-ranked cornerback in his draft class among those with at least 20% of total snaps played:

He was also named to the All-Rookie Team.

…Leads to a seat on the bench

But that impressive rookie performance earned Dantzler nothing more than a place on the bench the following season, as Mike Zimmer brought in veteran Bashaud Breeland to replace him and handed him the starting job without competition. . Breeland had secured ten fewer spots than Dantzler for the 2020 season, so Zimmer’s decision to give him the starting job over Dantzler upfront after his June acquisition was a headache. Dantzler apparently took issue with the decision, earning him a spot in Zimmer’s doghouse thanks to training camp. Dantzler was clearly miffed, with Zimmer and his co-DC Andre Patterson saying he needed to train better and play on special teams when asked about him during training camp.

The decision to start Breeland on Dantzler was even more particular as Dantzler’s claim to college fame was his ability to hold star WR Ja’Marr Chase to just 13 yards when they faced off in college, his worst game this season. The Vikings would face Ja’Marr Chase and the Bengals in the season opener. The Vikings lost that game in overtime, with Breeland giving up 5 receptions on 8 targets for 107 yards, 2 touchdowns and a penalty for defensive pass interference – most to Ja’Marr Chase.

Anyway, Dantzler managed to start 7 games last season for the Vikings and played more than half (685/1207) of the defensive snaps, having rotated in other games. Dantzler finished the season as the Vikings’ top-ranked cornerback and ranked 17th among 116 cornerbacks in the league, according to PFF.

The coaching changes are probably as welcome to Dantzler as anyone, given the issues he had with Zimmer last year. But not everyone is new to Dantzler. Daronte Jones returns as Dantzler’s DB coach after also coaching him during his rookie season with the Vikings.

Dantzler too seemed to announce that he would return to his old college number – 3 – this year, although it’s not official, and Jordan Berry is also expected to accept that.

But where does Dantzler go from here?

He is currently the Vikings’ outside cornerback, opposite Patrick Peterson. But the Vikings are also thin at cornerback and are widely expected to draft a cornerback, perhaps with their first-round pick. If so, this pick would likely be competing for a starting job at some point, and whether Peterson or Dantzler is the odd man out remains to be seen. It’s highly likely that a first-round rookie CB could play this season as the No. 3 outside cornerback, working in rotation and likely getting significant reps as he proves himself. Ultimately, a first-round pick this year would replace Patrick Peterson as the starter next season.

Dantzler appears to suit the Vikings’ new defensive scheme under Ed Donatell, himself a former DB coach. Donatell manages the Vic Fangio defensive system, having worked under him for many years, which manages numerous man cover systems, Cover-4 and Cover-6. Dantzler has been good in both press and zone coverage, so he has the versatility to work well in Donatell’s scheme. Also, despite his thin frame, Dantzler has proven to be great at running assist, something Donatell likes to see in his CBs as well.

Dantzler has been consistent at this level since the latter part of his rookie year, so it wouldn’t be surprising if he continues at this level of performance, and even improves on it with more consistent playing time and reps. and as he gained more experience.

Having a very capable outside cornerback on one side of the field would go a long way to improving the Vikings pass defense, especially if the pass rush improves with Danielle Hunter and Za’Darius Smith as rushers. point. Strong support from the coaching staff will only enhance Dantzler’s confidence and cockiness as well – important qualities in the best cornerbacks. Dantzler has a total of 3 interceptions and 8 pass breakups in what equates to just over a year of snaps. One of the goals of Ed Donatell’s defense is to generate takeaways, so Dantzler could have an opportunity to improve on those numbers this season.

Overall, Dantzler could see his first full year of work as a starter this season, provided he remains healthy. His past performance while on the court has been better than any other Vikings cornerback since Xavier Rhodes’ 2017 season. Maintaining that performance over 17+ games would be a significant improvement for the Vikings, and if he’s able to improve on his own performance over the previous years, great.

How will Cameron Dantzler fare this season for the Vikings?

Vikings star Justin Jefferson is getting paid. He waits his turn – InForum