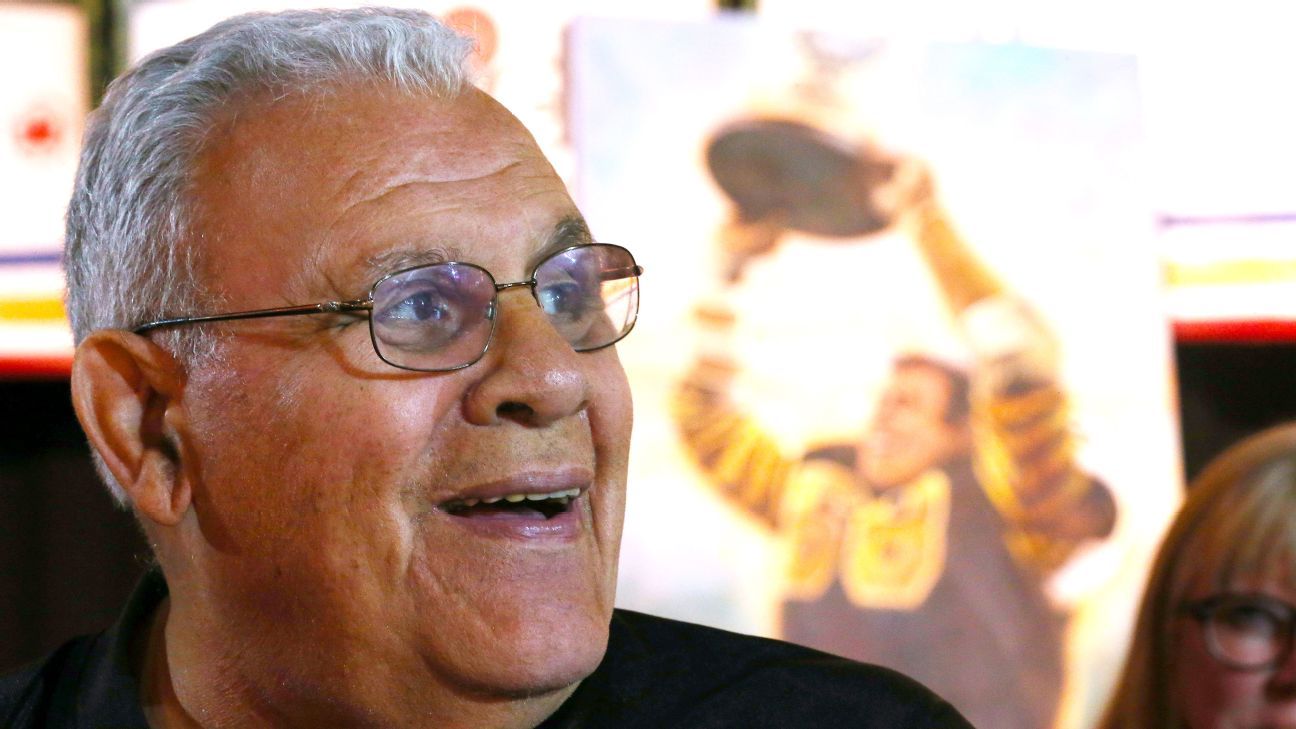 “It is with great sadness that the family of Angelo Mosca announce his passing (…) after a long battle with Alzheimer’s disease,” wrote Helen. “Angelo was a loving husband, father, grandfather and great-grandfather as well as a friend to many.”

Elected to the Canadian Football Hall of Fame in 1987, the former Notre Dame and Hamilton Tiger-Cats star was diagnosed with Alzheimer’s disease in 2015, shortly after his 78th birthday.

“Angelo Mosca was a superstar,” CFL Commissioner Randy Ambrosie said in a statement. “As tough as nails, he overcame a tough childhood and became a household name. A phenomenal football player, he has played nine Gray Cup games and won five, one with the Ottawa Rough Riders and four with the Hamilton Tiger-Cats.

“Scholar, intelligent and ahead of his time, he built his villain character into a larger-than-life personal brand. Unliked in certain markets, where he was the villain, his stature was unmatched in Hamilton, where he was a hero, and when he traded his epaulettes for wrestling tights, he captivated Mosca fans in countries near and far. “

The 6-foot-4, 275-pound Mosca gained national notoriety for his hit against Willie Fleming of British Columbia who knocked out the running back from the 1963 CFL title game.

Fleming took the ball off a pitchout and ran to his right. He had been tackled just inside the sideline and was lying on his stomach when Mosca came over the Lions player. No penalties were imposed on the play, but many – including then-Lions quarterback Kapp – felt Mosca’s hit was not only late but dirty.

With Fleming no longer able to play, Hamilton won 21-10 and bolstered Mosca’s reputation as the CFL’s baddest player, something he later promoted during his pro wrestling days as that bad boy “King Kong” Mosca.

Kapp never shook hands with Mosca after the 1963 Gray Cup. But he and the Lions got some revenge by beating Mosca and the Tiger-Cats 34-24 in the 1964 title game at Exhibition Stadium in Toronto for the BC club’s first-ever CFL Championship.

In November 2011, the two old enemies were invited to a CFL alumni luncheon during Gray Cup week in Vancouver. The former players were called to the stage in front of the crowd when Kapp, then 73, attempted to offer flowers to Mosca, 74, as an offer of apparent peace, but Mosca rejected the gesture with a oath.

Kapp then pushed the flowers in Mosca’s face, prompting Mosca to attempt to push them away with his hands. Kapp then hit Mosca with the flowers, and Mosca retaliated by swinging his cane and hitting Kapp on the head. Kapp then put a right hand on Mosca’s jaw, then a left which brought Mosca down.

Born in Waltham, Mass., Mosca moved from Notre Dame to the Tiger-Cats in 1958 before being selected in the 30th round, 350th overall, in the 1959 NFL Draft by the Philadelphia Eagles. Mosca chose to stay in Canada and transferred to the Ottawa Rough Riders in 1960, winning the first of his five Gray Cup rings that year.

Mosca spent two seasons with the Riders before joining the Montreal Alouettes in 1962. He returned to Hamilton in 1963 and remained with the Ticates until his retirement following the club’s home win in the Gray Cup. against Saskatchewan in 1972.

Mosca has lived for years in St. Catharines, Ontario, wrote a book with Steve Milton called “Tell Me To My Face” which was released in September 2011.