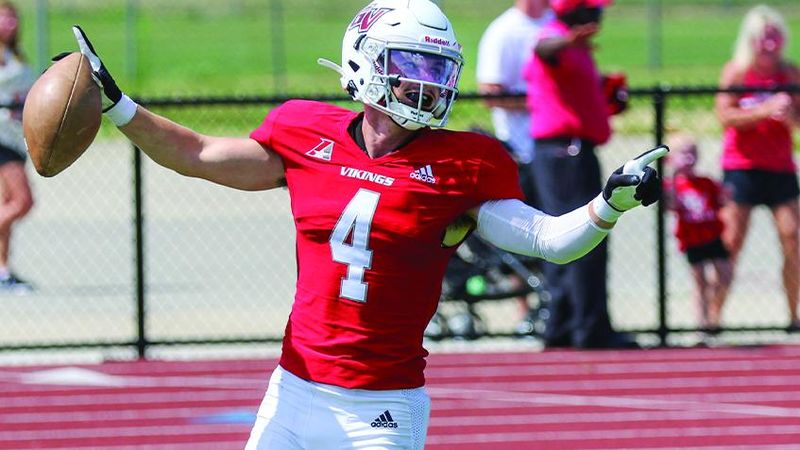 Atchison, KS- In week two, the fifth-ranked Vikings advanced to seventeenth among the Benedictine College Raves in a Heart of America Athletic Conference game.

The Vikings were first on the board with 12:10 left in the quarterback Johnny Sullivan (SR / Clinton, IA) topped a 65-yard six-game drive with a 4-yard touchdown to Anthony Turner (SR / Hartwell, GA) to take a 7-0 lead over the Ravens. Benedictine responded well with her own 75-yard eight-play touchdown, but the extra point wasn’t good making it 7-6 Vikings. In the ensuing Viking drive, Jensen Gates (SR / Ankeny, IA) scored on a 29-yard touchdown to make the lead to 14-6 Vikings. Once again, the Ravens responded with another touchdown to take the score to 14-13. The Vikings added another touchdown late in the first quarter with Sullivan finding Brandon Martin (SR / Monroe, LA) on a 10-yard touchdown that took him to 21-13 after a quarter-game.

In the second quarter, Nathan Hamilton (JR / Bettendorf, IA) had two baskets, one over twenty-three yards and one over forty-one yards to bring the score to 27-13 at halftime. The Ravens scored early in the third quarter on a 14-game 75-yard long touchdown to take the Vikings to 27-20 with nine minutes left in the third quarter. The Ravens lined up for a field goal late in the third quarter, but the Vikings’ defense blocked the kick and Demareo Luckett (JR / Cordova, TN) recovered the ball and returned it for a teams touchdown Vikings specials that brought him to 34-20 going into the fourth quarter. At the end of the fourth, Sullivan found Turner again this time for a 17-yard touchdown to bring the score to 41-20 with just over four minutes to go. The Vikings’ defense managed to force a turnaround on the downs and the offense took time to bring the Vikings to 2-0 this season while the Ravens fell to 1-1.

Sullivan finished the day with a 223-yard pass and three touchdowns on 14/23 passes. Gates leads the Vikings on the ground with 59 yards on 11 attempts for the lone touchdown. Turner finished with four catches for 69 yards and two touchdowns. Gerald Sama (JR / Des Moines, IA) finished with 83 receiving yards on just three catches. Cole Rollinger (SR / Eldridge, IA) leads the Viking defense with 13 total tackles including 11 solo. Rocky Schoenfelder (SO / Bettendorf, IA) led the defense with three tackles for an afternoon loss. Drake Miller (JR / Fort Dodge, IA) finished with an interception for the Vikings.

The Vikings will then host the Baker Wildcats, ranked seventh 2-0, on Saturday September 11 at Duke Williams Stadium. The kickoff of the match is scheduled for 12:00 p.m.