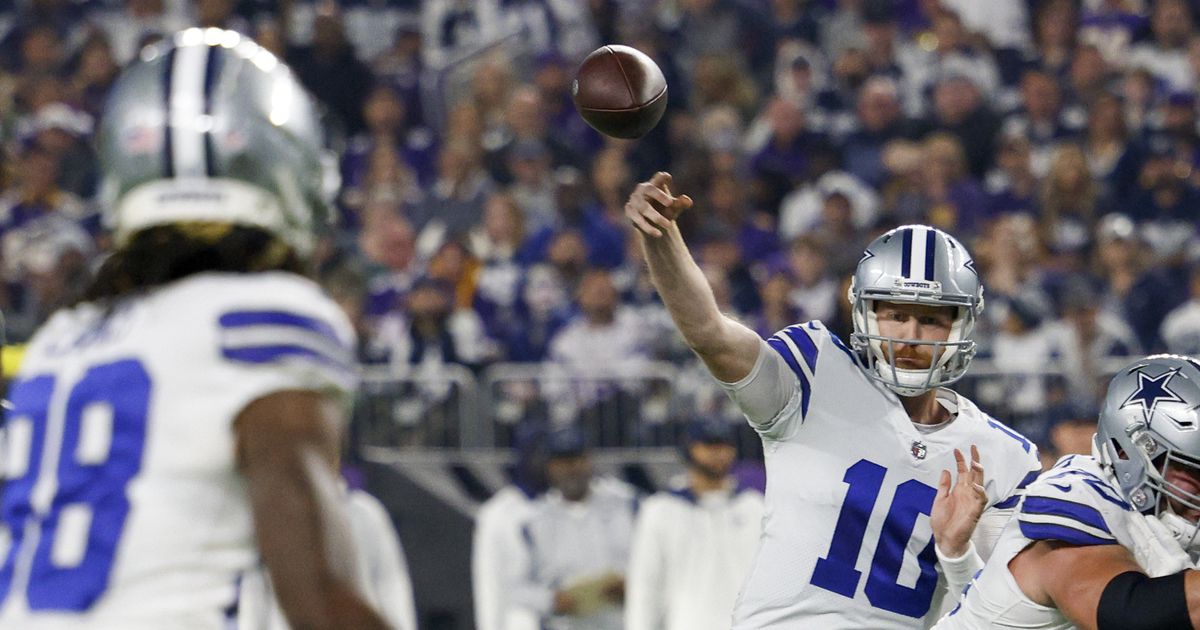 It was an evening of career firsts for Cooper Rush on Sunday night.

Led by three points with 2:51 seconds left, Rush walked the Dallas Cowboys onto the field before finding Amari Cooper in the back corner of the end zone for the 5-yard touchdown.

Dallas’ defense, much better than a year ago, ended things to give Rush and the Cowboys a 20-16 victory over the Minnesota Vikings.

Rush recorded his first career touchdown in opening practice for the second half, connecting with WR Cedrick Wilson for a 73-yard touchdown to tie the game at 10.

Rush’s touchdown pass to Wilson was the longest pass for a quarterback making his first start as a Cowboy since Roger Staubach’s 75-yard touchdown pass against the St. Louis Cardinals in 1969.

Aside from the preseason, Rush had never started an NFL game before Sunday night. He was selected to start on Sunday while Dak Prescott takes another week to rest his strained right calf muscle. The strain, suffered during a touchdown pass in Dallas’ overtime win over the Patriots on Oct. 17, occurred on the same leg as Prescott’s open ankle fracture and dislocation last October.

A formal decision was not made on Prescott until shortly before kick-off, but Rush took the first-team representatives to practice on Wednesday and Thursday in anticipation of a likely start.

Here are some of the national reactions to the Cowboys’ victory:

Who had Cooper Rush with a chance to win it after two minutes.

Cooper Rush has won more NFL games than the Lions this year.

no Dak, on the road, prime time game

They did it without Dak: the Cowboys win 20-16, and they’re 6-1. Important victory in the NFC for the classification of the playoffs at the end of the season.

Backup QB plus no offensive tackle and a W. That’s pretty wow.

Kirk Cousins ​​is now 2-8 against Dallas. He’s so overrated he was outscored at home tonight by Cooper Rush… after losing at home last year to Andy Dalton. Dry cousins. You like this? I love it.

This could really be the year of the Cowboys