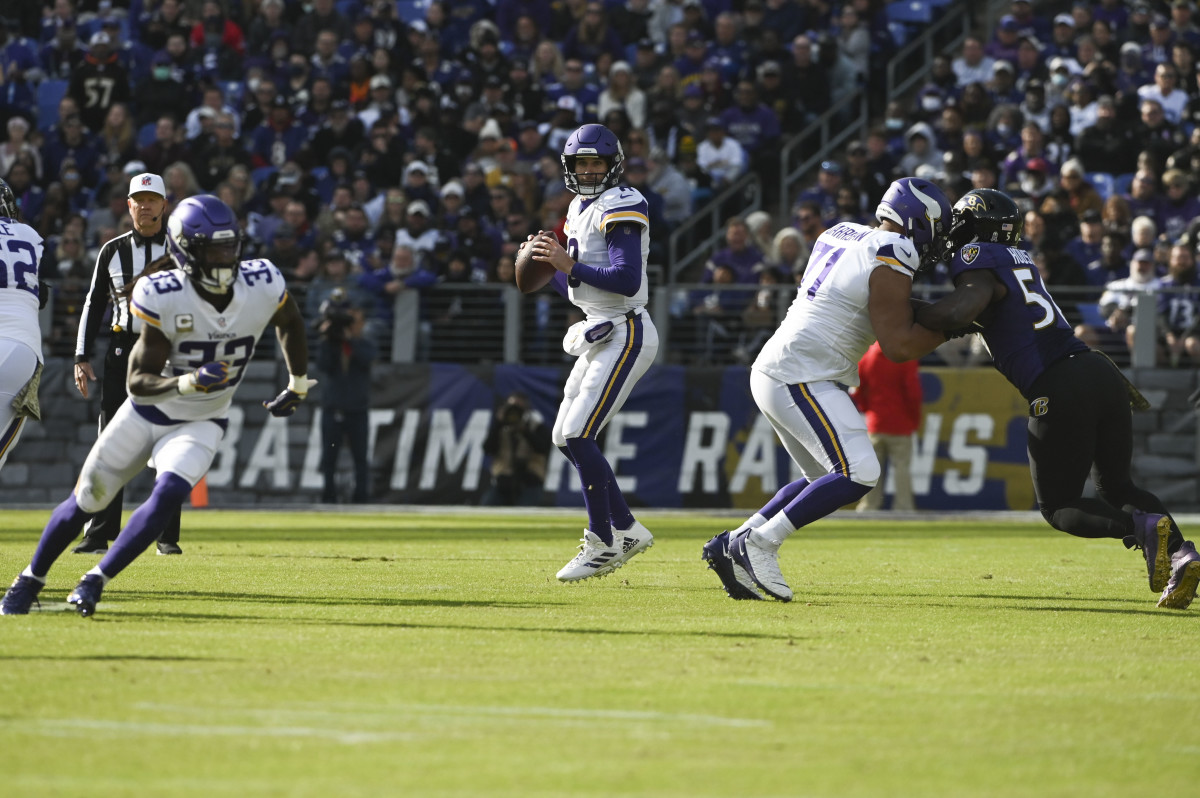 The Vikings, a seven-point underdog that day in Baltimore, were already leading 14-3 when an opportunity presented itself to extend that lead even further. It was late in the first half and rookie safety Cam Bynum had just made an incredible play, diving for an interception on a stray pitch from Lamar Jackson. Not only that, but Bynum had the presence of mind to step out of the grass and run 27 yards deep into Raven territory.

Kirk Cousins ​​and the Minnesota offense were perfectly prepared to take a 21-3 halftime lead if they could capitalize on the field position and get into the end zone. Yes, they had kicked two offensive possessions in a row, but it was a great opportunity to find someone of the momentum they had created on two explosive touchdowns to start the game.

It was an opportunity to put the foot on the gas and bury the Ravens, who had done nothing in attack all half-time.

Instead, the Vikings retreated. A first descent towards Dalvin Cook lost a meter, which was common on an afternoon of celebration or famine for the Viking star’s running back. Three of Cook’s 17 carries totaled 105 yards. The other 14 were only five meters.

Then Kirk Cousins ​​threw a few wrong passes. On the 2nd and 11th, he released a ball that was too high for Adam Thielen. On the 3rd try, he narrowly missed a Justin Jefferson open near the line to win. The Vikings were content with a field goal and the Ravens scored a touchdown with pass interference in the final 90 seconds of half-time. Instead of a 21-3 lead, it was 17-10.

“It’s mine,” Cousins ​​said. “I felt second, you know, we have to hit Adam on his way out and I felt third, at third and 11, we have to hit Justin on his way out. It’s an 11 point swing, because that we hit a basket instead of getting a touchdown and we don’t run the clock. So now we give them a chance to get seven and we only get three. It was a game or a few games where I was very disappointed with myself for not making these games and staying on the pitch. “

The Vikings are 3-5, and those five losses are seven points or less. They have lost games by 3, 1, 7, 4 and 3 points this year. This is how you end up with a differential of more than 3 points to accompany their disappointing record.

“We have to capitalize on the turnovers, the opportunities that we get,” Cousins ​​said. “We have to make plays, score points and distance ourselves. We haven’t done it enough so far.”

The Vikings momentarily delayed the inevitable a few times, first with a touchdown on the return from kick-off to open the second half. But that 24-10 lead turned into a 31-24 deficit, as the offense continued to struggle and the Ravens scored a touchdown in four straight possessions dating back to the end of the first half.

Then Cousins ​​and company staged a final rally at the end of the rule, pulling themselves together after two punters in the second half and covering 75 yards for a tie score.

But I never really felt like this was a game the Vikings were going to win. The defense’s second interception of the day – this one, a fantastic solo effort from Anthony Barr in overtime – created another opportunity. And once again, the Vikings failed to capitalize. On their only offensive possession in overtime, they had two short wins to set up a 3rd and a 9, and then apparently weren’t ready for the Ravens to blitz.

This game was there for the taking on numerous occasions. But as has been the case all year, the Vikings did this to themselves by letting a team hang around and stay within striking distance. Instead of remaining aggressive and extending the lead, the play appeal became conservative again and execution was lacking. The offensive failures resulted in a shorthanded defense spending more than 46 minutes on the court and running out of gas.

The Vikings relied too much on Cook in the first downs, setting up tough third downs that killed the practice. Justin Jefferson and Adam Thielen finished with just five catches on 12 targets, which is nowhere near enough.

“We have to be better in possession, possession out,” Cousins ​​said. “If we could do that I think we would be able to score a lot of points, a lot of production, ultimately leading to some wins.”

The history of Viking season revolves around assumptions. They had plenty of opportunities in their five losses. But Klint Kubiak’s conservative play calls – combined with Cousins’ untimely struggles, offensive line and Mike Zimmer’s defense – put them in an unfortunate position.

They are 3-5 and always looking for answers as to why every game comes down to the end game, even when they have a fast lead.

All the players can do is keep working and hope the results change. But coaches – especially Kubiak and Zimmer – have to take a long look in the mirror and realize that what they’re doing hasn’t been good enough. They have to keep pushing the ball towards Jefferson and Thielen, to get the kill instead of letting the game be decided at the very end.

“We obviously worked, we want it more than anything,” said Eric Kendricks. “We work every day to do that. Obviously the product isn’t showing on the pitch. We lose these very close games over and over again, but at some point it’s going to turn out. We fight every day. We come to work on Wednesday and study our opponent. We train hard. We take care of each other in the locker room, and it’s just a shame that this keeps happening, because we care about the fans and we we care about winning. But we have to start putting it all together. “

Unfortunately for the Vikings, time is running out. The second half of their season officially begins next week against the Chargers, and they can’t afford much more losses.

If they don’t make some serious changes to the way they call games and make adjustments, this season will continue to get out of hand.

Thanks for reading. Make sure to bookmark this site and check back daily for the latest Viking news and analysis throughout the season. Also, Follow me on twitter and don’t hesitate to ask me questions about it.