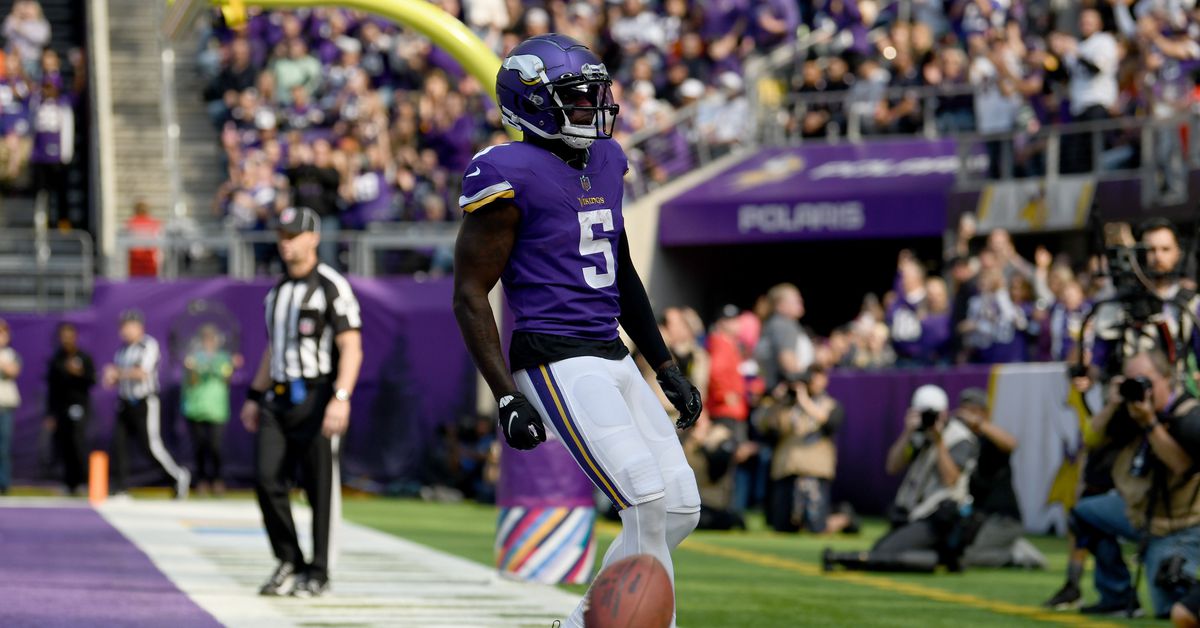 With minutes remaining in the second quarter of Sunday’s game at US Bank Stadium between the Minnesota Vikings and the chicago bearsthe Vikings led 21-3 and appeared to be heading for a win.

Anyone who has watched this team for a while knows better.

Thanks to another fourth quarter drive from Kirk Cousins ​​and the Vikings’ offense and a timely play from Cameron Dantzler, the Vikings won their third straight game, eliminating the Bears by a final score of 29-22 in of week 5 at the US Bank. Stadium.

The Vikings won the toss and, rather than delaying as they usually do, opted to receive the opening kickoff. They walked the field unresisted, rushing for 86 yards in 12 plays, wrapping things up with a 1-yard touchdown by Dalvin Cook to give themselves a 7-0 lead.

Chicago responded on its opening possession, courtesy of a 50-yard field goal from Cairo Santos to make it 7-3. The Vikings then ran down the field on their second possession as well and got the same result: Dalvin Cook entering the end zone. The second was a 5-yard run on the first play of the second quarter and it put the Vikings ahead 14-3.

After a three-and-out from Chicago’s offense, Minnesota marched into the end zone again, this time wrapping up the drive with a yard pass from Kirk Cousins ​​to Jalen Reagor to carry the score at 21-3. On that drive, Cousins ​​also set a Vikings team record for consecutive completions as he started 17 of 17 in the afternoon.

Chicago finally entered the end zone late in the second quarter, as David Montgomery came in from nine yards to cut Minnesota’s lead to 21-10. The Vikings had a chance to add points late in the half, but Greg Joseph’s 53-yard field goal attempt drifted to the right as the second quarter clock expired.

The Bears cut the deficit to one score on the first practice of the second half, as Justin Fields found rookie Velus Jones Jr. for a 9-yard touchdown. Chicago went for two and didn’t convert, leaving the score at 21-16 with just over ten minutes left in the third quarter.

Chicago attempted an inbounds kick on the ensuing kickoff, but rookie Akayleb Evans recovered the kick in Chicago territory to give the Vikings great field position. The Vikings couldn’t do anything with it, however, as Joseph’s 51-yard attempt was blocked by rookie Kyler Gordon to give him a 5-point game.

Santos then cut the lead to two with a 43-yard field goal with just over a minute left in the third quarter to make it 21-19. On the next drive, the Vikings pushed to a 4-and-4 from the Chicago 47-yard line and left the offense on the field to go. They were rewarded when Jefferson fired a defensive holding penalty to keep the drive alive. Unfortunately, on the next play, Cousins ​​was intercepted by Kindle Vildor and came back near midfield.

Chicago capitalized on the field goal, as Santos connected from 51 yards to make it 22-21 with nine and a half minutes remaining. The Vikings got the ball back and got into position for a first goal at the Chicago 2-yard line. It took them a few tries, but on third and on base, Cousins ​​got past the quarterback for the touchdown. Cousins ​​then found Jefferson for a two-point conversion to cut the lead to seven at 29-22 with 2:26 remaining in the contest.

The Bears picked up the ball and pushed the ball into midfield, but Justin Fields was then looking for former Viking Ihmir Smith-Marsette. The pass was complete, but cornerback Cameron Dantzler took it away from his former teammate for a fumble to seal the game.

The win takes the Vikings’ record for the year to 4-1 and, thanks to Green Bay’s loss in London, gives them sole possession of the top spot in the NFC North. They will travel to face Miami Dolphins next week before taking their leave. The Bears drop to 2-3 this season and have a short turnaround ahead of them as they host the Washington Commanders this week for Thursday Night Football.

The victory also gives the Vikings a 3-0 record in the NFC North and makes them the first team to follow up a win in London with a win on American soil the following week.

The Vikings hang on to win another wild game by a score of 29-22 against the Chicago Bears at US Bank Stadium. Thanks to everyone who got their coverage of this week’s game right here at The Daily Norseman!