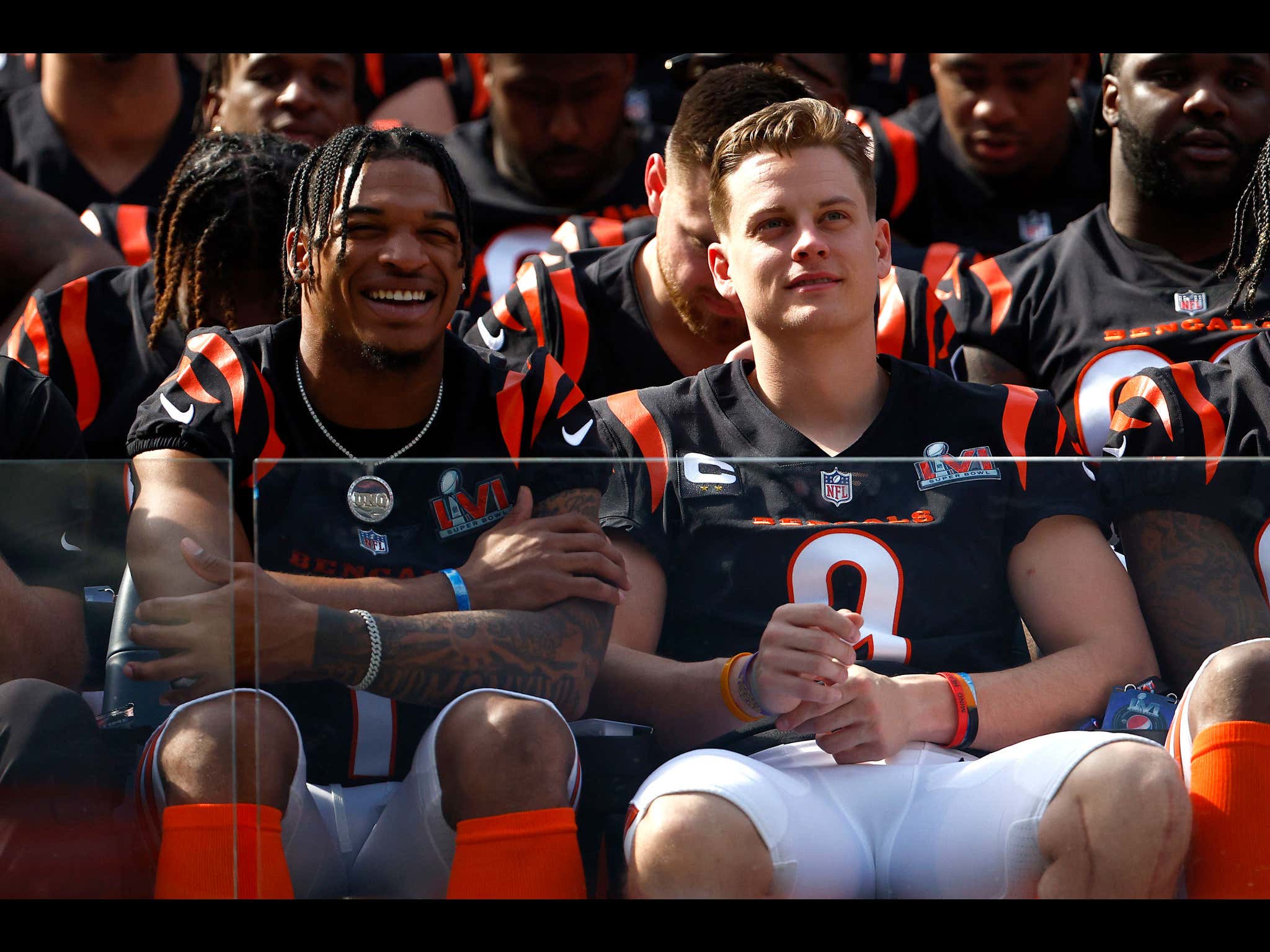 Even after his shitty offensive line left him to be sacked and pulverized into oblivion more than any other NFL QB, Joey B. insisted the 2021 Bengals had more than enough players to quality to compete for a championship. Anyone outside the locker room who says they really believed that — especially before the season when Burrow had just suffered a serious knee injury — is lying to you. It’s one of the many ways Joe Burrow is just different. And this guy. Whatever you want to say.

Anyway, I wanted to go over some highlights from another incredible feature from NFL Films to commemorate all that this team accomplished before entering training camp and the rise of the 2022 campaign.

Week 4 – TNF comeback against the Jaguars

An early 14-0 deficit had the makings of an embarrassing defeat written all over it. Letting Urban Meyer get his first win as Jacksonville head coach? What the fuck was going on here? A short week, a poor opponent and playing at home all contributed to a collective prime-time disappointment on Thursday night football.

“It’s time for me to take over,” Burrow thought to himself on the sidelines. And he took over, throwing for 348 yards and two scores in a 24-21 victory.

Amazing what happens when you give this man time to pitch.

The best part was that Burrow beat an all-out blitz to set up Evan McPherson’s winning field goal. It’s a clean, crushing kick from a free rusher. Joe Brr comes right back, celebrates with his teammates and yells, “You can’t fuck me zero! What the fuck are you talking about!?”

Week 7 – The Ravens Fuck and Find Out

You must love the boldness of former Baltimore defensive coordinator Wink Martindale. It doesn’t matter who he’s playing against. He comes after you. The problem is, you might want to make some adjustments when you take on Joe Burrow, who lit up the Ravens’ ill-fated secondary for 416 yards in a 41-17 rout at Baltimore.

On the sidelines, Burrow told Tee Higgins, “If we win this division, we can win it all.” It proved remarkably prescient – ​​even though it preceded a shock loss to the Jets and a blowout at the hands of the Browns in the following two weeks.

Funny thing is, 416 wasn’t even the most yards Burrow would throw against the Ravens for the season. He ended up with 525 in week 16. LOL. As a bonus, I’ll feature this sound bite (not in the NFL Films feature) about how Martindale tried to reject Burrow’s skill set leading up to their second reunion of 2021:

On the heels of Burrow’s franchise-record performance against the Ravens, we had Ja’Marr Chase’s best outing yet. The rookie phenom had various outstanding performance before this one. However, Burrow’s favorite LSU target salvaged his best performance for the most critical game of the regular season against the defending AFC champion Chiefs.

Chase went for 266 yards and three touchdowns to help Cincinnati clinch the AFC North in a 34-31 triumph. That prompted the following reaction from former Chiefs defensive back and fellow LSU product Tyrann Mathieu:

I like how people assume the rest of the NFL will have figured out the Bengals offense. As if they weren’t going to adjust their scheme with a wildly improved offensive line. Plus don’t people realize that Ja’Marr Chase was a fucking beginner Last year? Guy has at least one more piece of equipment to find. It’s a frightening prospect for anyone trying to protect him.

AFC Divisional Round vs Titans – “I put it where I want every time. Bad news for them.”

That was Burrow’s quote after the pregame warmups. He completed 75.7% of his passes for 348 yards and set up McPherson’s game-winning kick with a clutch to Chase on the right sideline. Did I mention Joe was fired NINE TIMES?

Perhaps my favorite soundbite came from o-line coach Frank Pollack in the middle of the Titans’ assault on Burrow. Pollack yelled at Isaiah Prince, “You don’t stop until that motherfucker’s buried in the grass!!”

Yeah, that didn’t really help. It didn’t matter either. Burrow helped the Bengals advance to the AFC Championship Game and a rematch with Kansas City.

AFC Championship Game – A Comeback for the Ages

I really hope the Bengals sign Jessie Bates to a multi-year contract extension. It’s not like you’re going to be all pessimistic when shit hits the fan if you’re one of the team leaders, but it was still impressive to hear what Bates said when Cincinnati trailed 21- 3 at Arrowhead Stadium.

“We’re fine bro,” Bates insisted. “D-line will keep it in the pocket, we can’t have any explosives. That’s all.”

The “him” was Patrick Mahomes…and between the pressure the Bengals generated up front and their stellar play at the back, they forced Mahomes to make multiple mistakes to help spark an epic rally and decisive victory 27-24 over the AFC in overtime.

Bates’ play to deflect a through pass away from Tyreek Hill and into the arms of Vonn Bell during the Chiefs’ only possession in overtime was among the most impressive plays you’ve ever seen from a defensive back.

While many expect the Bengals to back down because they lost Super Bowl LVI 23-20 to the Rams, I guess I’ll let the last two sentences of NFL Films’ latest masterpiece do the talking. of themselves.

“If you think you’ve seen the last of them, think again. If you’re wondering who to watch in 2022, it’s the Cincinnati Bengals.”