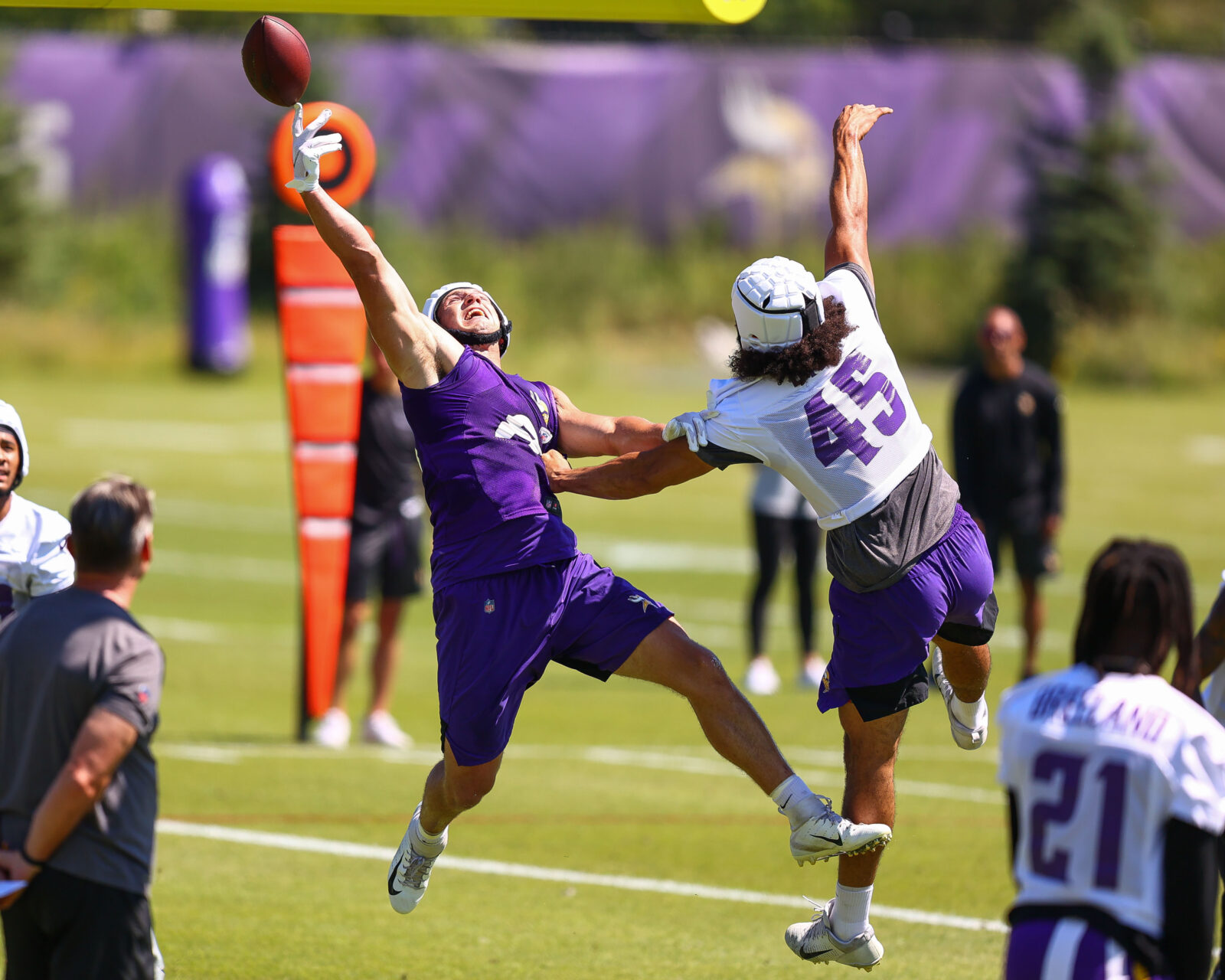 Football is almost here, just a little more until a football crosses Canton for the Hall of Fame game. On top of that, the training camp is just around the corner. With that, conversations now turn into position battles, and the Vikings have some good ones. Without further ado, let’s get into it.

We’ll start with the big one. One of the offseason (according to media reports) needs for this team was to find a solid WR3. Everyone knows we’re more than set with the Jefferson & Thielen combo, but the rest of the group was skinny. In my opinion, the need for another receiver was for depth purposes, as we know the Vikings used a lot of tight 2 sets in 2020. However, the team signed Dede Westbrook, and the battle for the targets behind our stellar duo looks good.

After Kyle Rudolph leaves, Irv Smith Jr. looks set for a breakout season. Even though the TE squad has not been properly used in recent seasons, I firmly believe that Klint Kubiak will find plenty of ways to get the ball into Irv’s hands. Besides Smith, the winner of the battle between Chad Beebe, Bisi Johnson and Westbrook will also have his share of touches. If Dede manages to play like he did before his ACL injury, he is the favorite. Also, how quickly he learns offense and develops strong chemistry with other players will be very important. At the start of the season, we’ll likely have Irv and Dede sharing that role. Keep an eye out for KJ Osborn as well, as he received a lot of praise during OTAs and minicamp.

It could also be a section on the nickel wedge, but Jeff Gladney’s legal status is still unknown and Mackensie Alexander is back, so it will be his job unless something unexpected happens. That said, let’s focus on the corner limits. One of them will still be Patrick Peterson, barring the unforeseen. The future Hall of Famer is under a 10million euro contract and it would be foolish to sit him on the bench. Three players are fighting for the job: Cam Dantzler, Bashaud Breeland and Harrison Hand, even though he is the underdog.

Dantzler has had a very good rookie season but has struggled with a few injuries as well. Breeland also lost a few games last year. Those are the two that get the most attention, but Hand has done very well earlier in the offseason. If he can build on that, Zimmer will have a tough decision to make and I think he’ll be happy with it. In good health, it should be Dantzler’s job to lose, and it will be a last second decision by the technical staff.

Danielle Hunter is finally back, but for the first time, he will not have his former criminal partner, Everson Griffen. The edge position in front of Hunter is awkward. Right now we have a backup veteran (Stephen Weatherly), a sophomore (DJ Wonnum) and two rookies (Patrick Jones II and Janarius Robinson). The former Jones coach believes he can start in 2021, and that’s certainly a possibility. This cockpit position will be fought for the entire season, with the first sign likely going to Wonnum. But don’t be surprised if Jones or Robinson is the starter by the end of the year.

After losing Marcus Sherels in 2019, the Vikings tried to find a replacement. The first one was Ameer Abdullah, but it didn’t work. In last year’s draft they picked KJ Osborn but it didn’t work out either and he lost his returner position during the season. Beebe replaced it and – you got it – that was also a no. For this season, rookies Ihmir Smith-Marsette and Kene Nwangwu have a chance. Nwangwu is expected to claim the kickoffs, while Ihmir returns the punts. However, the front office also brought in players with returning experience. You can debate that, it’s a good idea, but Pat Pete was a great turner back then, and if all goes wrong (we’re talking Vikings, so there’s always a chance) he can flip a punt sometimes. Breeland also had a few comebacks earlier in his career.

There are other interesting position battles out there, like the QB save (Stanley, Browning and Mond), DT4, WR4 and 5, TE3, and more. But I picked out the ones that should involve more shots this season.