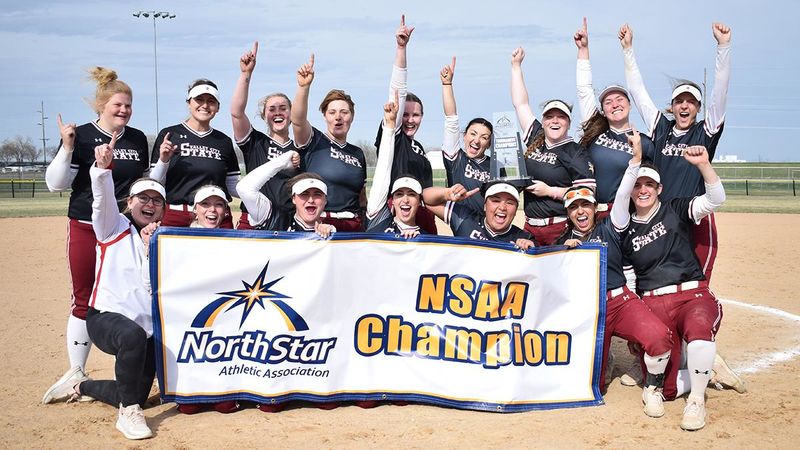 WATERTOWN, SD – Viking Softball is back at the top of the North Star Athletic Association.

Valley City State University beat top seed Bellevue University 11-3 in a win-win title game Saturday, earning the NSAA Tournament Championship for the second time in three years and the conference’s automatic bid for the opening round of the NAIA National Tournament.

The Vikings scored five runs in the first inning and four runs in the second to give themselves a 9-0 lead. After Bellevue cut VCSU’s lead to 9-3, the Vikings finished the game under the runs rule with a pair of runs in the fifth inning – punctuating the title with an RBI brace by senior Marissa Hawkins.

Valley City State (33-16) entered the double-elimination tournament as the No. 2 seed. The Vikings defeated top seed Bellevue in the semifinals on Friday afternoon, putting themselves in charge for the day of the championship. Bellevue found their way back to the championship with an 8-2 win over Mayville State on Saturday morning. Bellevue then defeated VCSU 7-5 in the title opener, forcing the win-win championship match.

“Our attitude between games was just to get our energy back and really come back with this unbeatable mentality that the pressure wasn’t on us and we could do anything,” said Aiello, who recorded his 300th career hit and broke the VCSU single-season home run record with a solo shot in the second inning of Game 2. “It’s really very good. I’m so happy to see this team succeed.”

The Vikings will represent the North Star Athletic Association in the opening round of the NAIA National Tournament, which features 40 teams at 10 venues across the country. Valley City State will find out its seed and destination at the NAIA Softball Selection Show on Tuesday at 4 p.m. Bellevue (42-13) is on the bubble to receive a general invitation to the national tournament.

“We had this feeling a few years ago, and I had forgotten how great this feeling is,” said a smiling Aiello after the game.

Aiello tied VCSU’s single-season home run record with his 15th home run in Game 1. In Game 2, Aiello broke the record with a solo shot in the second inning – which was also his 300th career hit. She added another solo homer in the fifth inning, giving her 17 homers this season. This beats the old record of 15 set by Kelli Unrein in 2006.

The Vikings finished with 13 hits in Game 2, beating the Bruins 13-4. Aiello and Rodriguez both went 3 for 3 and made two runs apiece. Aiello scored a team-high three runs, and Jessica Husband added two hits and two runs. Riley Perryman, Anne-Elise Gest and Sierra Crocker all had one hit and scored two runs apiece.

Brooke Gaudry won the circle, allowing just four hits and three runs over her four innings of work. She walked two and pulled out two. Joelle Lamontagne, who was victorious in the first three games of the VCSU tournament, pitched a scoreless fifth inning to end the title game.

Rodriguez had a perfect day at the plate Saturday, finishing both games 6-on-6 with one home run and four RBIs.

GAME 1: Bellevue 7, VCSU 5
Bellevue scored three runs in the top of the third and the Vikings made up the rest of the game as the Bruins took a 7-5 win in the league opener.

Valley City State cut the deficit to 3-2 late in the third inning, notching an RBI single from Jessica Husband and a base-loaded par pitch hit on Anne-Elise Gest. The Bruins had two more runs in the fifth for a 5-2 lead.

The Vikings responded again in the bottom of the inning as Joelle Aiello hit her 15th homer of the season – a solo left shot put the Vikings within 5-3. The Aiello Circuit tied the VCSU single-season record set by Kelli Unrein in 2006.

In the sixth inning, Bellevue had two more runs to make it 7-3, but VCSU’s Andrea Rodriguez fought back with a two-run homer late in the sixth to make it 7-5. The Vikings put their first runner down in the bottom of the seventh, but couldn’t extend the threat and Bellevue forced the second league game with a 7-5 win.

Rodriguez had a 3-for-3 game at the plate, scoring once and driving in two with his home run. Riley Perryman and Husband each had two hits as the Vikings finished with eight hits. Joelle Lamontagne pitched a full game for VCSU, scattering six hits and seven runs — five of which were earned. She walked three and took out five.