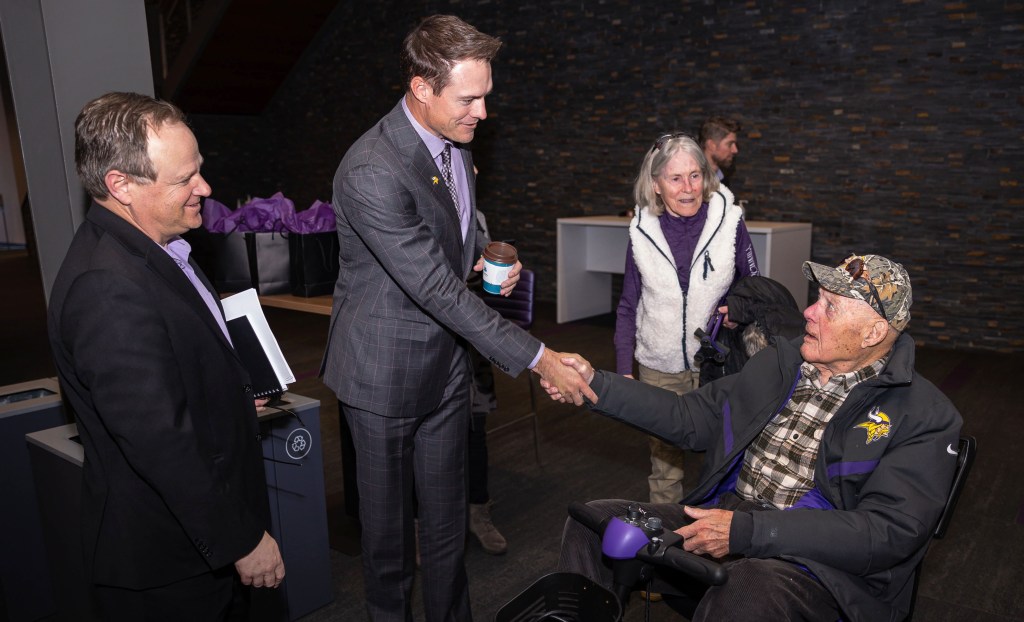 In 1985, Kevin O’Connell was born and Bud Grant coached his last game in the NFL. This year, nearly four decades later, the two have come together to talk football.

O’Connell was named the 10th head coach in Vikings history on Feb. 16 and was introduced the next day at a press conference at the TCO Performance Center in Eagan. That day he met the legendary Grant for the first time, who coached the Vikings from 1967 to 1983 and in 1985 and was inducted into the Pro Football Hall of Fame in 1994.

Since then, there have been several more meetings between the two at the team’s facilities. And shortly before Grant celebrated his 95th birthday on May 20, O’Connell hopped on a Zoom call with a number of his former Vikings players to wish the coach icon the best.

“I had some really good dialogue, even just a few quiet moments when he was at the facility and there really weren’t a lot of people around, to have a meal with him, and just sit and just ask questions, pick his brain, (get) his perspective on things, obviously from such an amazing leader,” O’Connell said. “He was responsible for leading some of the best teams in the history of our organization. I’m so lucky that he’s so willing to spend those times with me.

Grant led the Vikings to 11 Central Division titles and four Super Bowls, though they couldn’t win one. He compiled a record of 158-96-5 to become the winningest coach in team history.

“I think it makes me a better head coach in every interaction I can have with him,” O’Connell said, in his first year as head coach at all levels. “It was a real joy to get this job and (to have) the opportunity to build a relationship with Coach Grant.”

O’Connell, 37, had lunch with Grant at the TCO Performance Center, and he’s picking his brains out on football matters.

Modest Grant downplays meetings he had with O’Connell, a former NFL quarterback who served as an NFL assistant for the past seven seasons and won a Super Bowl in February as offensive coordinator of the Los Angeles Rams. Asked what the two talk about the most, Grant initially said it was “about the weather.”

“Well, we’re talking about football in general,” Grant said. “But he’s been around enough. He knows enough about the players. He was part of winning teams. He knows what he’s doing. »

Grant said he enjoyed getting to know O’Connell.

“He’s a good guy, but if he wins a few games he becomes a better guy,” Grant deadpanned.

O’Connell said in their meetings, Grant was often quick with a quip.

“He never misses an opportunity to criticize me about the great coaching staff that I compared to the four or five guys he was coaching with at the time,” O’Connell said. “So we always kind of have a back and forth banter.”

The Vikings roster lists 28 assistants working under O’Connell, a similar number to other NFL teams. Grant said he had four assistants in his first season at Minnesota – 1967 – although that number eventually rose to seven.

Grant, who has a primary residence in Bloomington but now spends a lot of time at his lakeside home in northern Wisconsin, isn’t sure how many games he could attend this season. But he plans to at least watch on TV.

“As long as I have my faculties, I’m interested,” he said.

Grant didn’t come to the TCO Performance Center for about two years because of the coronavirus pandemic, but he’s dropped several times this year. He checks his mail at his desk there and chats with people, including O’Connell.

“(I ask him) questions (like), ‘How did you do that? How did you end up becoming what he became as a leader?’” O’Connell said. it always comes back is to be authentic, to be yourself and to trust what obviously got you here and what you’ve built, the foundations of what you believe in while understanding that I can rely on on my great coaching staff he did ‘not necessarily always.

In May, the Vikings hosted Grant’s birthday Zoom call, which included about 20 of his former players. Tight end Stu Voigt was on the call, and he said other people on the call included defensive linemen Alan Page, Carl Eller, Jim Marshall and Bob Lurtsema, safety Jeff Wright, quarterback Bob Lee and wide receiver Bob Grim.

O’Connell joined the hour-long call with general manager Kwesi Adofo-Mensah. O’Connell was impressed with the respect former players had for Grant.

“Just to look back, so many years later, just the pure love and admiration that still comes through even on a Zoom call, from these guys,” O’Connell said.

Voigt said O’Connell said on the call that “today’s Vikings stand on the shoulders of guys from the past.” Lurtsema said the call “went really well” and that Grant “was so approachable.”

This is how O’Connell said Grant had been in the relationships they had this year. And O’Connell would appreciate the opportunity to meet the former coach as much as he can.

“I love having him with me,” O’Connell said. “If we could have him every day I would, but I think he’s earned the right to enjoy life a bit. But when he’s here and ready to be around our team and our organization, I think it makes us better.

Tom Brady sells $1.9 million worth of NFTs with subscriptions for once-in-a-lifetime fan experience