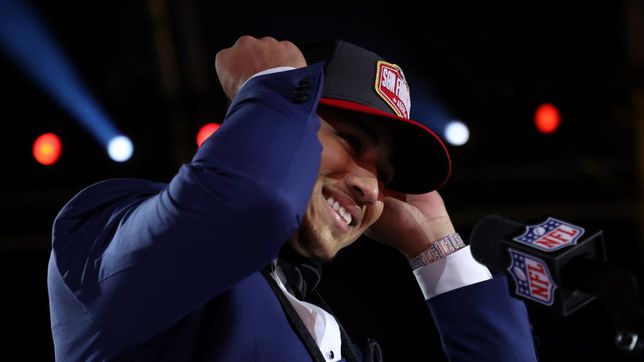 With the anticipation surrounding this year’s NFL Draft, let’s take a look at the top 10 picks in the 2021 draft and how their early seasons fared in the league.

Without a doubt, it takes a year or two before we can have a true assessment of any new player entering the NFL, in fact, that could be said of any rookie in any sport. Nevertheless, time and patience are not things that are granted for long periods of time when playing at the highest level. Indeed, teams are often caught between a rock and a hard place when it comes to determining whether the way forward is to seek instant results at the risk of long-term failure, or the absolute opposite, that is to say, accept that in the short term things will be difficult, but building for the future will result in long-term and above all sustained success. Take a look below to see who the top 10 picks were and how they handled in their first season:

Lawrence’s situation in Jacksonville did not get off to a good start. Indeed, with less than impressive stats, the No. 1 overall pick has at times seemed to struggle to take a bigger step. That being said, Lawrence has shown considerable growth throughout the year. He is a player after all who has gone from seven interceptions in his first three games to just two in the next five. Perhaps most memorable was his stellar performance against the Bills when he definitively topped Buffalo’s QB Josh Allen. The rookie didn’t return the ball on a single occasion and went on to have a winning campaign.

Another quarterback who had a baptism of fire has to be Zach Wilson. As was the case with the previously mentioned Lawrence, the Jets QB didn’t get any favors from the team that picked him. That being said, it’s worth noting that when he was sidelined mid-season through injury, Mike White – his replacement – produced at a level that raised the question of whether the Jets’ starting QB was also part of the problem. There’s no doubt that Wilson is a talented quarterback, but as his coach would later state, he needs to focus on being a bit more basic instead of just going for the plays.

While Lance suffered a knee sprain early last season, it was clear from day one that he was a QB who wasn’t afraid to get big. Comfortable in the pocket and definitely dangerous when he decides to run, the young QB has benefited from playing with a significantly better team than the aforementioned Lawrence and Wilson play with. That said, there’s a reason 49ers coach Kyle Shanahan moved to Lance after the Rams traded for Matthew Stafford. The kid has a game.

When Pitts entered the league, he did so with incredibly high expectations, but that was apparently no problem for the tight end. In his first eight games, he literally got off to a great start. The type of footage the rookie recorded would have been a standout year for any TE let alone one in his first season. Indeed, the rookie nearly decimated the normal expectations of a player at his position, so Falcons coach Arthur Smith moved him all around the offensive lineup. With long stretches spent playing at WR, Pitts definitely marked his first season in the league.

It’s not often you get to go to a Super Bowl in a rookie season, but that’s exactly what Chase did as the Bengals rode a historic run to the big game. Granted, there was a lot of hype around Chase, but the youngster was still up against the aforementioned Kyle Pitts as well as Jaylen Waddle and DeVonta Smith as he tried to remind fans why there was buzz around him. her name. This, however, did not take long. In seven of his first nine games, Chase has rushed for at least 50 yards, with two games over 150 yards. Frankly, the Bengals got exactly what they were looking for. With a minimum of 20 yards on each reception, his synergy with former LSU alumni and current Bengals QB Joe Burrow is evident.

While some will point to the numbers on the board, the reality is that Waddle has been better than his stats indicate. That’s not to say the wide receiver had a bad season, but any casual viewer will be well aware that it can deliver more. Complicating matters in his first season was, of course, the idea that Miami hadn’t stabilized their QB situation. With that, Waddle faced a situation that was changing and as such couldn’t show exactly what he was capable of. That being said, with speed to spare and trickery that can win games, not to mention the addition of the deadly Tyreek Hill, Waddle looks set to turn some heads this coming season.

While the Lions didn’t achieve much last season, there is actually one thing they did and that was Sewell’s selection. To be frank, the offensive lineman has lived up to everything that was expected of him. Initially started at right tackle, an injury to Taylor Decker forced Detroit to switch the rookie to left tackle. Needless to say, he took to it like a fish to water. Decker would eventually return, but there were certainly some head-scratching as the rookie performed more than admirably in his absence.

As far as Horn is concerned, it’s more about what could have been than what was. Having suffered a broken foot in Week 3, the cornerback will unfortunately not return for the season. It was actually a blow for the Panthers as their rookie had actually gotten off to a flying start in the league as he helped the Panthers to a 3-0 start, but in the end it wasn’t meant to be. With reports now suggesting that Horn is up and running again, it will be interesting to see what he can bring to his second season.

If there’s one rookie on this roster who’s hit the ground running, it’s Patrick Surtain. The cornerback came into the league at one of the toughest positions to play on any team and made his own almost immediately. Having shown no signs of uncertainty against the league’s top receivers, the new kid on the block has definitely turned heads. Some would say it was just a knee injury that derailed his hopes of being included in the Rookie of the Year conversation, but truth be told, that doesn’t matter. The future is bright for Surtain and the Broncos and with the team dropping a franchise QB in Russell Wilson, it will be interesting to see what happens this season.

If there’s one name that became familiar last season, it’s DeVonta Smith. It’s true that the wide receiver has lacked consistency at times, but for what was lost in his ability to be consistent, he’s returned in versatility and flamboyance. Week 9 was one of many memorable moments when he caught five of six balls for 115 yards (23.2 yards per reception) and a touchdown. Indeed, Smith appears to be following the Alabama tradition of big wide receivers who put big numbers on the board in the NFL. Keep an eye out for him in 2022.

FOX Sports set to hire Super Bowl-winning coach, but not as replacement for Troy Aikman